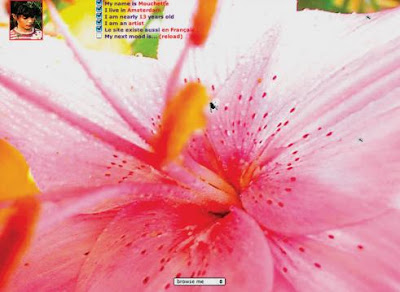 Mouchette.org is a website of Mouchette a persona created by an artist Martine Neddam. Mouchette is a nearly 13 year-old girl who claim herself as an artist because she said so: "I heard that the only way to become an artist is to say you are one. And then you can call "art" everything you make.... Easy, he?" On the site, there are several interactive activities, such as participants are invited to give advices on how to commit suicide under the age of 13, to join Mouchette's international fan club and to answer Mouchette's questions along with your name and email address.
The main color theme of the site is pink suggesting girlishness and youth. On the home page, a profile picture of an innocent girl is placed on the left top corner and the close-ups of pinkish flowers are randomly shown as the background. On the "***digital flesh & blood***" page, there is a close-up of a girl licking the glass of a scanner along with a question "Want to know what my tongue tastes like? Try it on your screen and tell me". After participants submit their answer, they will get to "***bisou****bisou****bisou***" (Bisou means kiss in French) a page of a close-up of a girl’s lips sucking her figure. On that page, participants are invited to "meet my father". The link directs them to an introducing page of "my father" of an animated background of a raw meat carved "Papa". As they click on a link "Dad and me", sentences related to Mouchette’s father are shown on the page, such as "This page show the love I have for my father", "I made a portrait of my dad out of a piece of raw meat because of that "flesh and blood thing" between him and me." and "My dad is such a hmmm.... moving person! That's whay I made this animated portrait of him."
As participants reload or go back to the page, gasping, weeping and giggling sounds of a girl react. Small icons of ants appear on some pages, the itching sensation of an ant can be conceived as the eagerness and yearn of an adolescent girl. Besides that, a little fly is shown as the symbol of Mouchette herself because her name Mouchette means "housefly (mouche)" in French. The idea of the name came from a 1967 French tragical film by Robert Bresson, Mouchette (1967). The story of the film is about a girl Mouchette whose life is miserable commits suicide by rolling herself into the lake after being raped. (fig.1)
The Images and words are the powerful and playful languages in the site. Because of the decorative flowers, the pink color and her lovely profile picture, the image of Mouchette appears to be innocent and sweet. However, she’s very complicated. The content of the website is sexually suggestive, bizarre and morally wrong. The extreme close-ups of the skin, tongue and lips of a girl convey erotic feeling as if she allows participants to touch and feel her intimate parts. One the pages of Mouchette and his father, the sensational sentences seem to indicate her sexual attachment to his father. In the complex, their impure and strange relationship is illustrated by flesh and blood.
The web site is also associated with moral issues. On the “suicide kit” pages, Mouchette welcomes participants to share tips of commit suicide for teenagers. It’s supposed to be a joke. However, many people take it seriously posting comments to tell people it’s wrong. According to a comment of “get. a. life” on 07 Nob 2010: “Get a life, seriously. Think about someone other than yourself, someone who is actually in real pain; watch the damn news, read the newspapers. You have a whole life ahead of you, and posting dumb emails about killing yourself is not going to get you anywhere.Its a pretty easy answer, a 3 yr old can work out how people die, so why are you wasting your time? Get it into your twisted mind that life is hard; just dont be so selfabsorbed and dramatic.” To me the tip sharing not only serves as an irony of adolescents (such as teenagers who are Emo, melancholic and full of problems), but also allows people to work out the meaning of life through discussions. 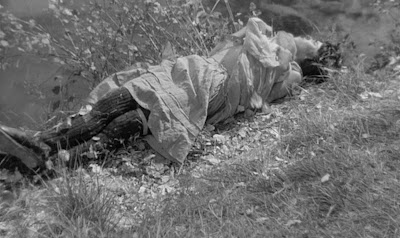 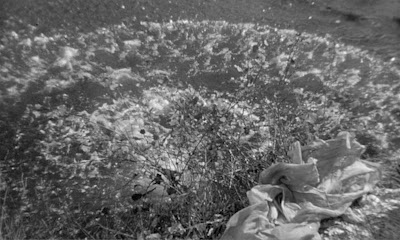